It was based on 4MHz Z80 processor and shipped with 32 KB of RAM, expandable to 64 KB. Altos eschewed using the (fairly standard at the time) S-100 bus, but packed their board with a disk controller (which could connect up to two 8-inch Shugart drives), two serial and one parallel port, while also leaving room for another optional Z80 to be used as DMA controller and an optional AMD 9511 floating-point coprocessor. As operating system, this machine could use CP/M or Oasis.

I still remember when my friend Joseph and I were discussing whether it was better the PC Dos or MS DOS … the first of IBM and the second of then Micro-Soft .. (then it was so …) … good times those. . and the war Altos or IBM PC … Oh..what a memories … for us, able to program only in Assembler and in Basic .. we really did some amazing things …

INTEL or ZILOG….we choose INTEL … with a tiny 8008 (the very first microprocessor…4 bit  code 4004 was already getting out of production) and lot of assembler hours we arrive to manage simultaneously up to 8 x 12 inch and strictly monochrome video displays to show real-time stock’s rates transmitted by analog phone and modem at 300 Baud from the AGI headquarters in Rome. We had 300 of our displays installed in the San Paolo Bank’s branches which did provide, for many years, real time data to those customers interested in the Italian Stock Exchange early on ..

A few years later and with the arrival of the Internet and its browser Netscape and the first Windows 3.0, the world of computing (… just say IT ..) was literally overturned. It was the beginning of the revolution … Moore’s law, co-founder of INTEL, said:

“The complexity of a microcircuit, measured for example by the number of transistors per chip, doubles every 18 months (and quadruples every 3 years).”

The graph below shows the number of transistors inside a microprocessor, the heart of a computer … and it almost tells us that an I Phone 8 has an enormously higher computing power than the computers used to send the first man on the moon. 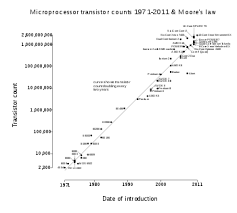 Today, with the arrival … better say, with the fast expansion of Block chain-related technologies (..Satoshi Nakamoto had already published the Bitcoin protocol in November 2008), the world faces the greatest technological revolution of our times …

The consequences of this revolution are not, unfortunately, in the reach of all and yet few people are able to understand the influence on the structures of our present society. This is a revolution coming  from the submerged world of the Deep Web and the “good” and even the “bad” hackers … from the world of antagonists and those of “Occupy Wall Street” .. and those who, like me, have seen the dark years of ’68 … In short … those who do not accept that humanity is guided and controlled by those who have power … especially that of the money … .By the way .. I am one of those… and I’m still NOT accepting it ..