An interesting article by Andrey Vedishchev to better understand the differences between the various technologies being developed around the Blockchain.
Try to understand how the clash between the forces of the “system” and the real developers, those who have brought this new technology to the world, is taking shape and how “the system” will try to maintain its market by offering “open” solutions, but in realities closed and managed by the same corporations against which we are fighting …. However, the very fact that this technology has been “forced” to be recognized is a first step towards a better future.

Hyperledger, how the colossus, shape the future

You may be use thinking only about cryptocurrencies, but this is not necessarily the case: Hyperledger is not a cryptocurrency, it is not a Blockchain, nor is it a company.

It can be defined as a collective effort by dozens of companies to develop open source solutions based on Distributed Ledger Technologies (DLT) – of which Blockchain is the best known exponent – for the industry.

It is now common knowledge that Bitcoin or Ethereum have scalability problems of not little relevance caused by the fact that each peer takes care of validating all transactions, update the Blockchain, keep it in its entirety on a storage device and execute algorithms of consent.

Not to mention that transactions on Blockchain like that of Ethereum are visible to anyone in clear. Of course, sender and recipient are addresses composed of sequences of alphanumeric characters, but if in a not too hypothetical future the DLT should become the founding mechanism of the new Internet, companies may find themselves interested – or obliged – to declare their public address.

The direct consequence of this is that the details of a supply of raw materials, for example, could be visible to the customer and supplier competitors; publishing such information would lead to a competition problem. Imagine, for example, that Samsung knows in advance if and when LG will have difficulty in the production of televisions of a certain type . 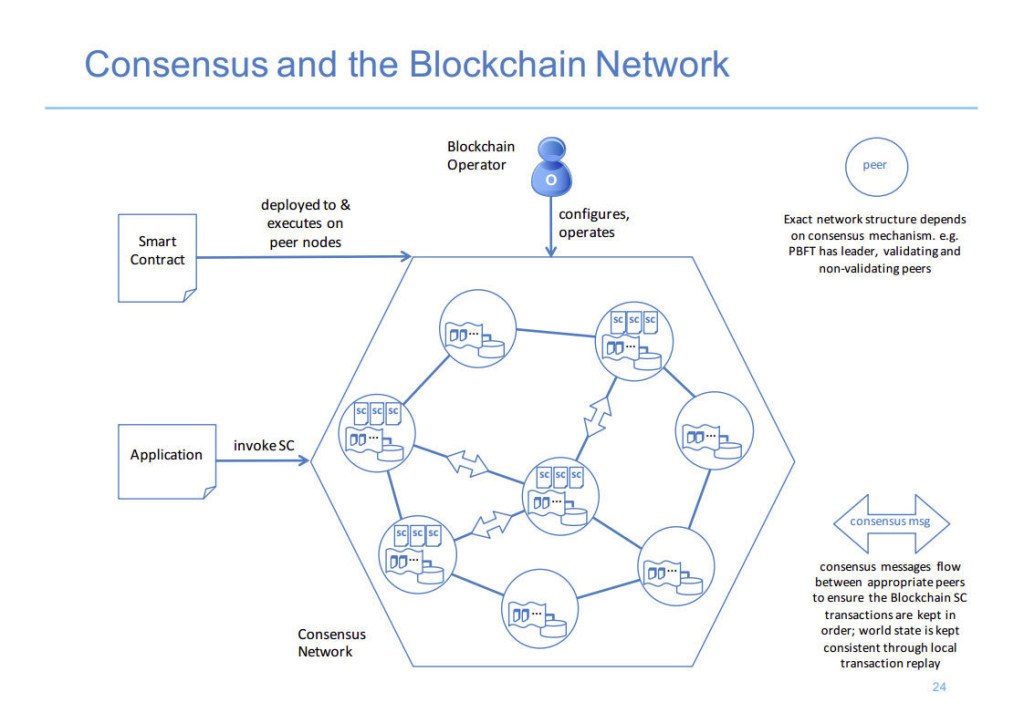 For this reason, within Hyperledger, a real innovation consortium, various alternative solutions are being developed. Solutions certainly open source – as mentioned before -, but intended for companies and therefore guarantors of privacy and privacy for users. Let’s now look at some of the most interesting projects to date.

.. And who guarantees the guarantor ?? …. The   Facebook case is still in our memory … or no one remembers it more ??

One of the most interesting peculiarities is that Fabric allows the creation of channels. Let’s take an example to explain why this lends itself to be defined as disruptive. Imagine being in a future where, to make processes more efficient, an agri consortium to which wine producers, bottlers and supermarkets adhere, adopt Hyperledger Fabric.

A producer member of this consortium could decide to sell part of their wine to a specific bottler at a preferential price, maintaining a different price for all the other bottlers in the consortium. For this purpose, a channel could be created to which only the two parties involved in the transaction would have access, and no one outside of it would know the amount paid by the bottler. If a public Blockchain was adopted like that of Ethereum, instead, this information would have been accessible to anyone, but with Fabric this does not occur.

It seems clear to me that this is the basic reasoning of “let’s find a way to be smart”.

Fabric also offers full support for the implementation of smart contracts to be written in “chaincode”. The chaincode is now written in Go, but updates are planned that will also allow the adoption of Java and other languages.

Of course, cryptocurrencies are not involved at all in this process. Of course, nothing prevents the consortium from creating one to use as “good” to settle transactions. But Fabric, like the other projects under the aegis of HL, are not at all bound by the use of any cryptomoney.

Sawtooth is used in the same cases as Fabric, but with some differences. The most obvious it is a product developed by Intel. An interesting feature of Sawtooth is that it also allows the creation of trustless Blockchains, unlike Fabric where they were all “permissioned”.

In Sawtooth it is possible to change the consent algorithm simply by issuing a transaction on the Blockchain which is then approved by the network. No need for fork, in short. (True, Bitcoin?)

OMG!…Bitcoin has been created as an alternative to the FIAT money and not for industries..

ST then implements one of the most promising consensus algorithms: the Proof of Elapsed Time (PoET). Intel declares that a “lottery function” should at least guarantee:

How does it work? Each participant in the network can request, through a secure function implemented in the Sawtooth codebase, to become a leader and validate a given block. More participants will try to obtain this privilege, and will prevail who will have obtained the shortest waiting time, randomly assigned by the system.

Once this waiting time has elapsed, a further function will check that the leader has reached the possibility of validating the block in a legitimate way and through the authentic function. If this is verified, the leader can validate the block. The probability of being elected leader depends on how much you contribute to the network, where the contribution provided is measured by the quantity of general purpose computational resources at your disposal. It is therefore implied that ASICs do not go well, which would give a decidedly disproportionate advantage to the same spending with general purpose hardware.

This system is therefore consuming orders of magnitude less energy than the traditional Proof of Work of Bitcoin, but guarantees a similar level of security and integrity of the distributed ledger. Furthermore, the low cost of participation required also encourages small users to participate in the consensus algorithm.

Not to mention that the disincentive to cheat disappears if we consider that a solution of this type would typically be used within a group of companies, and these have every interest in remaining within the group. Isolation would lead to huge economic damage.

Imagine again the bottler of the first example that loses access to the wine consortium after perpetrating an improper conduct: it would incur an economic drama, no longer having access to wine producers that allowed prices certainly facilitated compared to those contracted with a third-party wine producer in the consortium.

In short, Hyperledger promises to significantly accelerate the research in the field of DLT and lead us into what can become a new Internet definitely closer to the original vision of Tim Berners-Lee. To participate you must be a member of the Linux foundation, which administers Hyperledger.

I do not think that Tim wanted the segregation of the Web in several sects closed within them. The Web had to be for everyone and not just for the corporations and their separate Blockchains. The real problem today is the interoperability of ALL Blockchains being created  possibly without having to pay huge amounts to get access, as written below.
In addition, commissions are charged: $ 250,000 for the premium level, while to become a “general member”, you pay between five and fifty thousand dollars, depending on the number of employees within the aspiring company. There is a complete exemption for non-profit organizations and for government agencies.

In addition, commissions are charged: $ 250,000 for the premium level, while to become a “general member”, you pay between five and fifty thousand dollars, depending on the number of employees within the aspiring company. There is a complete exemption for non-profit organizations and for government agencies.

The advantages of being a member are many: in fact, you can actively collaborate in the realization of projects and propose new ones, have the opportunity to participate in private events and meetups with other members, receive technical and legal advice on DLT technologies.

And you? How do you stand on the question of scaling and development of DLT? Do you prefer an approach like that of Hyperledger or do you line up with Bitcoin, Litecoin and the development that is carried out by independent developers? Let us know yours in the comments!
Definitively on the side of independent developers. Technology must be everyone’s and accessible to everyone. I would not like to see a new Microsoft handling the world again.